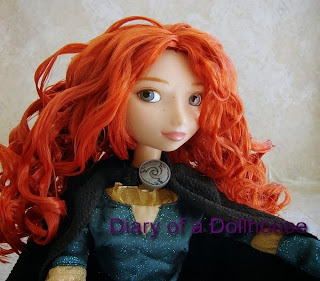 The Disney move Brave is my favorite Disney movie so far.  I love that Merida is a strong willed girl that isn't interested in being married off to her handsome prince.  I love that she has relationship issues with her mother.  And most of all I love her hair.

Merida is a Medieval Scottish Princess who's mother wants to find her a proper husband.  Merida has other plans.  She's interested in archery, not men.  And the story is about the friction that develops because of their stubbornness. In present day, Merida is Disneys 11th and newest princess, crowned in the summer of 2013.

Read about Princess Merida and enjoy some photos of my 17" tall Disney Store Merida Talking Doll on my blog.